Double standards and an unconscious dominicanism 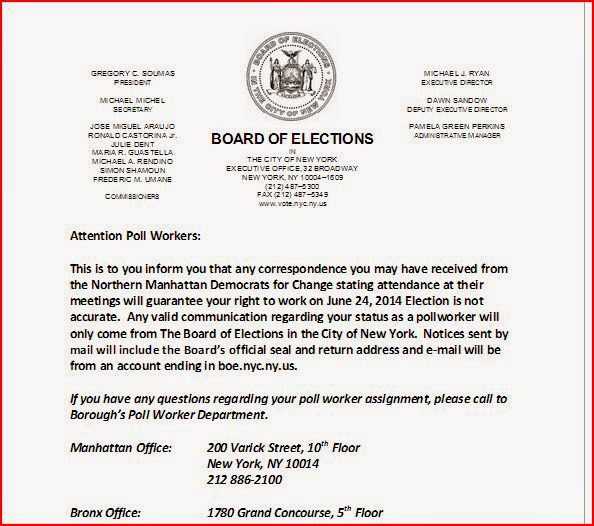 By Miriam Ventura
Westchester NY.-If what Dominican voters of district 13 want is the representation in Congress of a politician who scratches, exhales hairs according to the environment of his surroundings, and his stressful back-and-forth convenient circumstances, handling himself with clumsy yet premeditated aggression towards supporters and opponents; if a political monstrosity whose methodology is downright shady, dragging a mischievous and malicious Maquiavelo (Machiavelli) down the Street of bitterness, acrobatic paws, dangerously clawed, a malleable spine that will guarantee a safe drop from nearly any political trick performed, if that is what Dominican voters want then this catlike figure must be elected as a congressman.
If that is what drives this feline-enwrapped Dominicanism, then yes we should be scared this June 24, 2014, where the second time Adriano Espaillat challenges the legendary Charlie Rangel for congress. If that is not what drives Dominicanism, then we have nothing to fear.
A blind vote for an individual who turns his back on hierarchies is not favorable. It is a vote for a feline specimen swollen with ambition, that which lacks long term memory, who seem to be “erase”, forget, the evidence and history of backing building owners between 1997-2010 while conditioning and / or eliminating rent control laws.
In that same container of forgetfulness Espaillat allowed other actions in the field of education, information, right to livelihood, health and other topics diminish in the Dominican neighborhood. For example the Senator and candidate for the district 13 congressman supported his pupil and ally, Councilman Ydanis Rodriguez in the name change of Juan Pablo Duarte School to PS Los Dos Puentes… One can ask: Does not the founding father of Quisqueya (Dominican Republic) belong in the iconography of the Dominicanism that Espaillat cherishes so dearly?
Before starting this article installment, I saw one of my favorite films: Kramer Vs Kramer in which Dustin Hoffman recounted how one could destroy a bond, an experience, a partnership, a family. I felt his words "it’s about love", and the here is the parody: this is a community, not a political character. What guarantees that for being Dominican that makes Espaillat the best thing that can happen to Quisqueyan community? Where is it written that voting for Espaillat, is necessarily patriotic? Ah, well, yes, the ones who were paid in this political showbiz along with Espaillat who justifies himself in exaggerating the patriotic emphasis in this election ...
Ah, and of course, and I do not blame them- those Dominicans who do not know any other alternative, because neither Espaillat nor his entourage have given them this opportunity. They have not been educating or empowering Dominicans in that sort. So blaming them would be ignorant.
I accuse politicians who promote ignorance, those who, via political “tips”, social mobility and continuity, allow double standards like Adriano Espaillat’s in which he has waved like a flag throughout his political career. We see it in a simple review of his votes, endorsements and sponsorship of laws on education, retirement, religion, senior citizens, etc.
Let's see:
Our aspiring congressman votes in favor of ethical choices, yet he is the first be reprimanded during this race by the Board of Elections to discontinue the practice of ensuring volunteers a job by just attending the meetings of Manhattan Northern Democrats for Change. The Board of Elections of New York stated that any notification of jobs of this sort will be exclusively from the official institution with their seal.
Espaillat in this double standards said Nay to legislation S 5596 - (Revising The Metropolitan Commuter Transportation Mobility Tax) - which included the Metropolitan Transportation Authority - MTA to give greater control of the use of funds from transportation companies throughout the State of New York which would result in beneficial incentives and special assistance to users and commuters while impose greater control on the constant increases in public transportation. Espaillat did not sign the act but publicly "sold" himself in subway stations and trains in New York, as the great defender of users and commuters of transportation services as well as “selling” himself as MTA’s greatest challenger. His package of histrionics includes of course a couple of "intimate" cable television producer, speakers and communicators who also join in on this boutique. Monkeys would dance to any tune for a good price.
Our great and catlike defender of Dominicans said Nay to the Legislation S -6735 S - (Amends to the Public Employee Retirement System) which increased by retirement by 3.5-6% for retirees and seniors. Well luckily it passed even without Espaillat’s vote, while holding his campaign headquarters in Isabel Geriatric Center...
After our “Premium Dominicanist” received support, benefits and overall friendship from Charlie Rangel, as any malevolent cat would do, scratches and meows with treason and betrayal. Espaillat associated himself with Vince Morgan, a former executive of Rangel, just like today’s hiring of Eliot Spitzer’s “girlfriend”: Lis Smith, who according to press sources cited at the end of this article, is part of the staff of Adriano Espaillat.


Like Jack the Ripper I like it in parts, others articles installment I will detail why it is not necessarily appropriate to have "A Connecticut Yankee in King Arthur's Court" ... Oops! pardon me, “A Dominican like him in the Congress of the United States”.